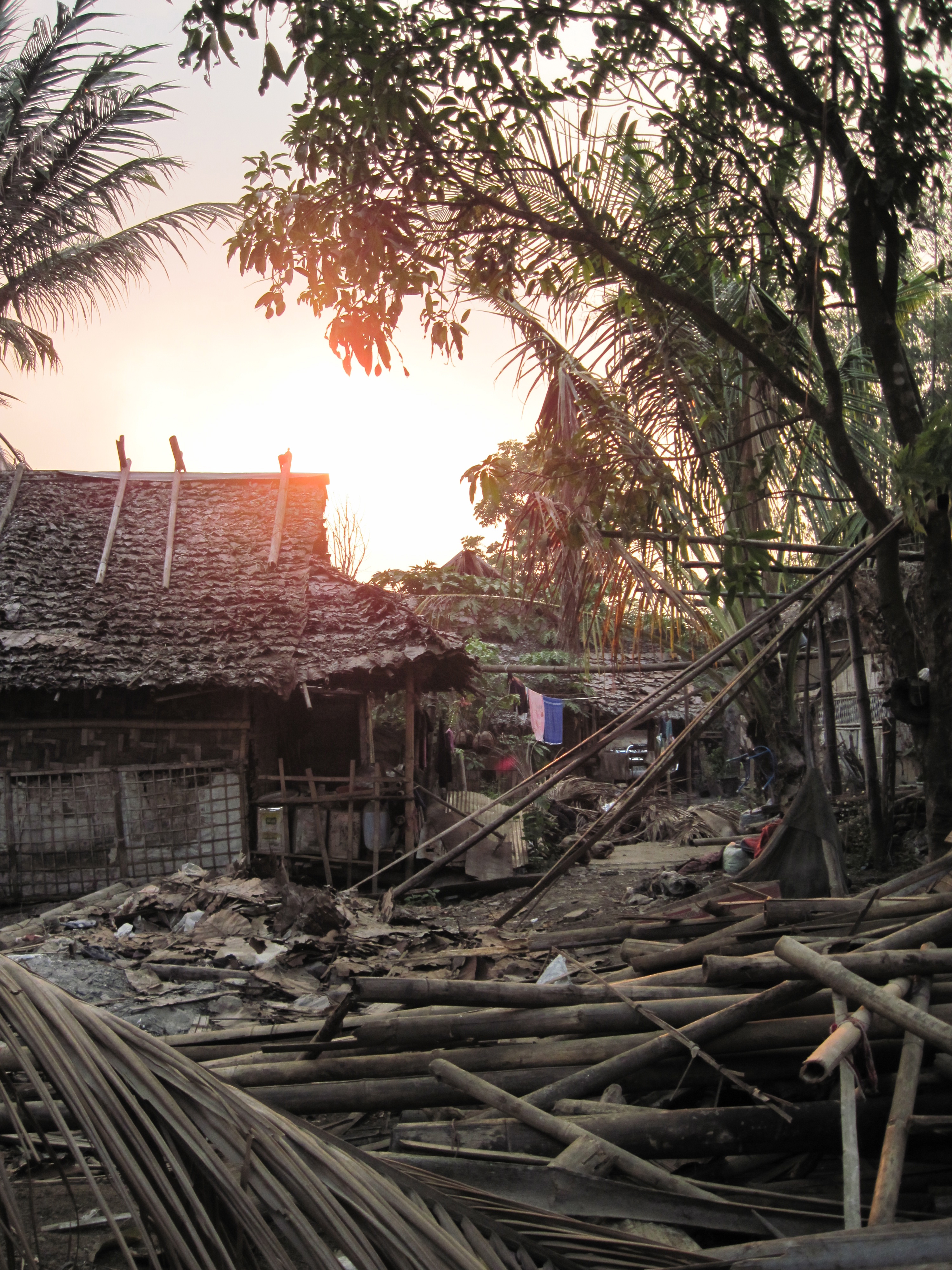 I woke up to the sounds of the refugee camp. Lying on a bamboo mat, with a mosquito net hanging from the bamboo beams of the thatched roof hut, I could hear men chopping wood, women scraping metal spatulas across iron woks where samosas and pakoras cooked in sizzling oil, children’s feet kicking up dust as they ran through the dirt lanes and dogs barking as they passed. Over it all, tinny music pumped out of a speaker from the monastery, in a harmony that made all the sounds crash together like a rudimentary orchestra.

Maybe the sounds were more alive because everyone in the camp were doing something – kids were playing with each other rather than soundlessly tapping at a computer or video game, cooking was done after hours of preparation and over an open fire instead of in a microwave and men were stitching together shingles of leaves to ensure their homes do not flood during the rainy season.

It was only 6 a.m., and I was probably the last one awake, since people in the Nupo refugee camp rise with the sun. About 12,000 refugees — Burmese, Karen, Mon and many other ethnic minorities from Burma — live in this camp, tucked in the jungle about 8 kilometres from the Burmese border and six hour drive from Mae Sot via windy, mountainous roads.

I’ve come here with Pawk Mai, one of my students and Julia, another volunteer from Help Without Frontiers, an NGO that provides education programs for Burmese refugees and migrant children. Pawk Mai, an energetic 18-year-old with a infectious smile and charming dimples,  has grown up in the camp. She technically still lives here with her grandmother and two younger siblings, even though she spends a lot of time in Mae Sot, living with her aunt so she can go to a school in Mae Sot.

The moment we arrived, joyous and celebratory music woke us up and drew us to the monastery, a colourful but simple rectangular building where residents were celebrating what can simply be described as a monk graduation. The young men who had reached monkhood, or the next stage in advance of it, were having their heads shaved, a laborious process with a single-blade Bic razor, their black hair falling onto a white sheet held around their neck.  Others were dancing to music amplified through a decades-old megaphone that crackled and failed at times, but not long enough to interrupt the graceful movements of hands and feet and hips. Women pressed their thumbs to their index fingers and rolled their wrists in rhythmic time with their nodding heads.

Some of the young novice monks were dressed in silk gowns with flowers around their head and black makeup around their eyes. They were hoisted atop shoulders and paraded around the crowd with pride.

Inside the monastery the next day, a single fan rotating slowly above the heads of four monks, I spoke with one refugee in his 20s who used to be a monk in Yangon. He fled the country in 2007 after the Saffron Revolution, in which tens of thousands of monks and members of the public marched through the streets of Yangon in protest of the military dictatorship. The regime responded to the peaceful protest with heavy-handed violence, raiding monasteries, arresting, interrogating and torturing monks. The man who had sworn himself to Buddhism was horrified by the violence and followed his uncle’s advice take haven in the Nupo refugee camp in case the authorities were looking for him.  “I thought I would be a monk my whole life,” he said in a soft-spoken voice. “But I had to change my clothes.”

Many teens and 20-somethings living in the camp are facing choices that could define their future. More than 62,000 refugees from Burma have been resettled to the United States in the last decade. However, the U.S.-based International Rescue Committee has announced it is ending the resettlement program and so refugees have to make a final decision on whether they want to go to the U.S. or go back to Burma. 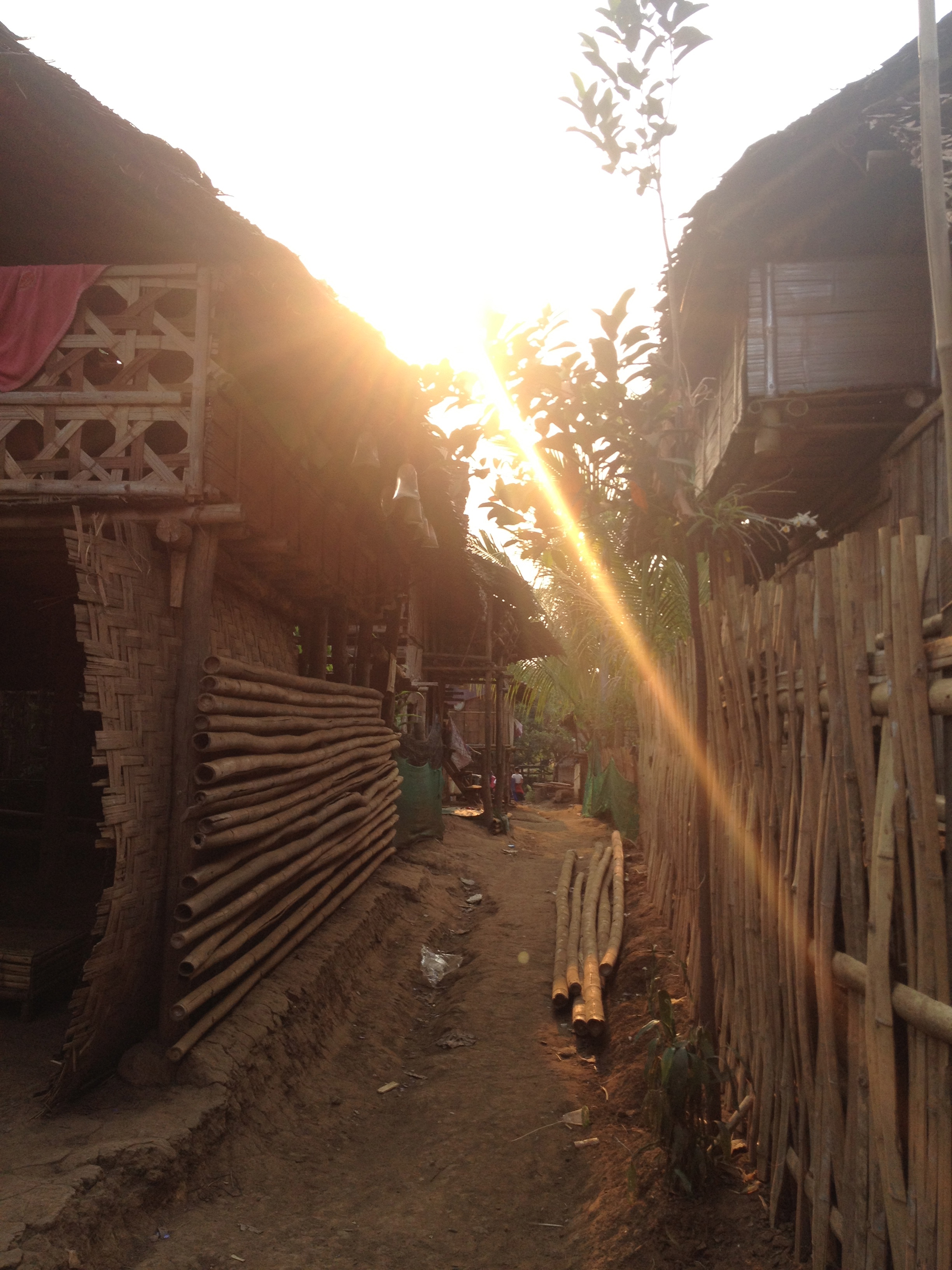 A 21-year-old man who runs a tea shop with his mother and sister said his brother has been resettled in Chicago where he is working as a butcher. The 21-year-old, who works in the refugee camp as a geography teacher, said he is unsure of whether he wants to go to the United States, apprehensive of whether his English is good enough to get by in the Western country, the culture of which could not be further from simple life in the refugee camp.

Pawk Mai, finishing her cup of sweet Burmese tea, echoes this uncertainty. “I am the same, sometimes I want to go to the U.S., sometimes I’m not so sure.”

The other options are to try and get a visa to work in Thailand or to return to Burma, a country many young refugees have never even stepped foot in.
“My Thai friends ask me, how is Burma? I say, I don’t know, I have never been there,” Pawk Mai said.

Other refugees are hoping to return to their home country once it is safe, but, understandably, there remains a deep mistrust of the Burmese government, especially among Karen refugees who were driven from their homes by Tatmadaw soldiers who would torch villages and ruthlessly kill villagers.

“The Burmese government says it’s safe for refugees to go back but that is not true,” said a 19-year-old girl, Suzi, who fled Yangon with her family in 2007 after violence broke out.  Despite the continued uncertainty in Burma, Suzi sees her future in her home country where she wants to be a tour guide. She was about to complete a test that would make her eligible to complete high school degree in Burma, so she can go to university in Yangon. Suzi was working on improving her English, taking classes in the refugee camp. As we spoke in the back of a crowded songtaew on the way back to Mae Sot, her essay topic seemed appropriate as I reflected on the simple life in the refugee camp, which is full of people who are just happy to be alive, with a roof over their heads and with the people they love. “Does money buy happiness?” she asked. We both agreed that it does not.