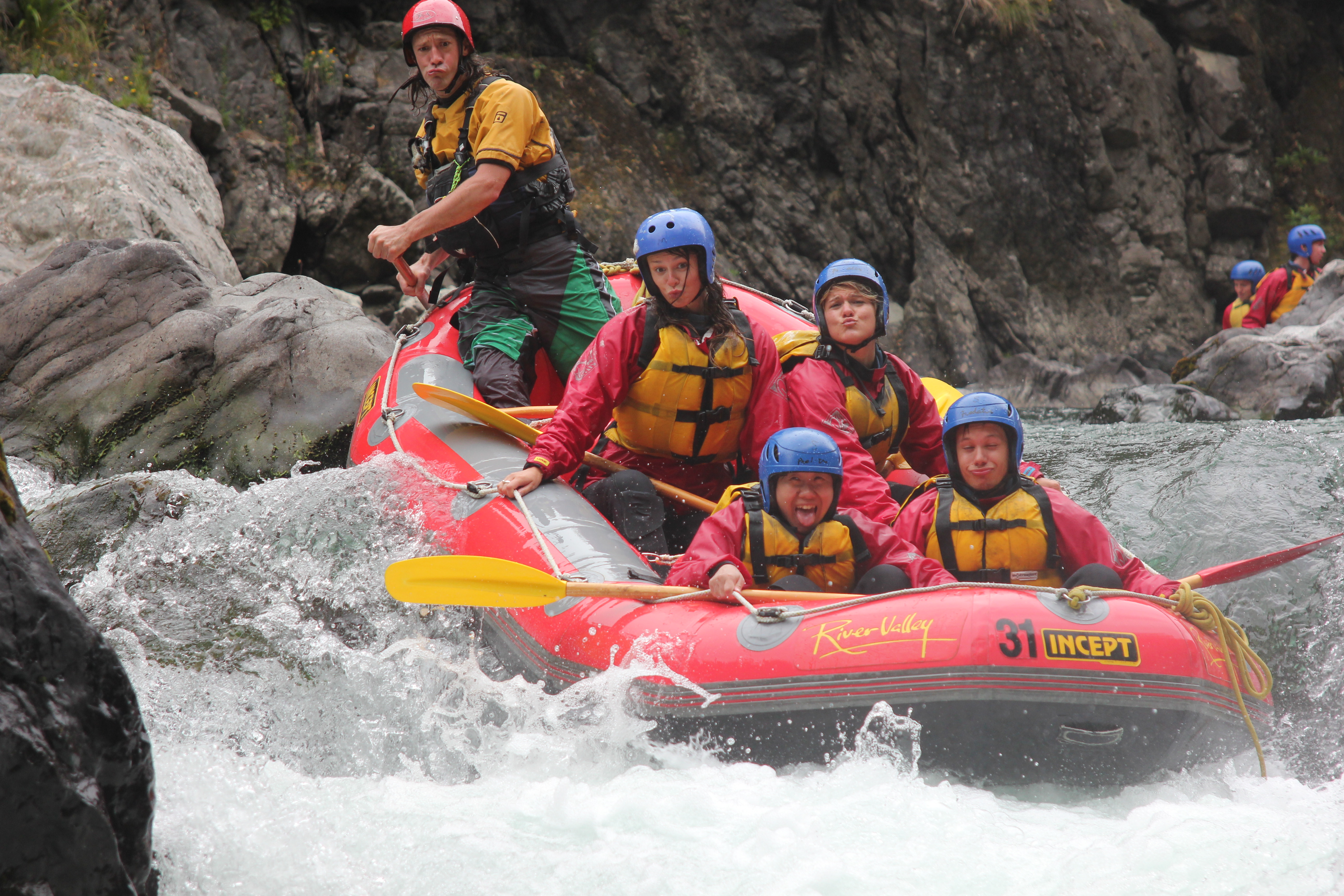 One minute we’re coasting down the Rangitikei River, taking in the lush green hills and valleys flanking the crystal clear water. The next, we’re paddling at full force as our raft plummets down a grade five rapid. The boat is nearly vertical, then submerged beneath the crashing water, and when we come up we’re gasping for breath and hungry for more.

This is white water rafting, River Valley style. River Valley Adventures is a family owned company that sends about 5,000 people a year onto those ever-changing rapids. Like us, most of their clients are first-time rafters, who have to put their trust into the experienced guides leading them down the river. Our guide is Derek Klapka a Canadian from Hawksberry, Ontario, a small town near the Quebec border which accounts for his strong French Canadian accent.

He teaches the four of us — a British girl, a German guy, a woman from Singapore and myself — how to paddle in sync, how to lean into the rapids and most importantly, how to avoid falling out of the boat. Before we got into the water, Derek assured some of the more terrified among us (me) that only about five per cent of clients actually fall into the water. Although he also mentioned that someone drowned in the river in 2008, so my terror is still palpable.

“Oh god, why I am paying $150 to hurl myself down a waterfall,” shouted out the equally nervous British girl, Meghan, beside me. Under Derek’s guidance, we worked our way up to the grade five rapids gradually and soon we all felt confident to hit the big time. Our nervous, silent concentration was soon replaced by laughing every time we’d pop up from a challenging rapid. Eventually we were sharing inevitable sexual innuendos when Derek shouted for us to stroke harder or when we had to bounce the boat to un-wedge it from between some rocks. The guides stopped the boats at one point so the group could cliff jump into the refreshing water. After about three hours and 13 kilometres travel, we hopped out of the boat at the River Valley lodge wishing we could do it all again.

Derek has been a white water raft guide all over the world, in Canada, Chile, Argentina and Honduras. It’s the ever-changing nature of the Rangitikei that causes him to rate this ride as one of the best half-day trips in the world, and in his opinion, certainly the best in New Zealand, aptly known as the adventure capital of the world.

“As a river, it’s really well-balanced. There’s good balance of class two, class three, three four fives. And the scenery is really nice as well. From the first part … a bit more like rural a bit more farmland, and then we’re in the gorgy area and then we’re in a more canyon-like area. So as far as eye candy, it makes it nice. As far as rapids, it’s ever moving and there’s always something different. To be perfect on this river is difficult. So you’re physically busy all the time.”